Spatial computing includes human-centred technologies such as virtual reality, augmented reality, mixed reality, and the metaverse, but what is it, and how do we apply it? 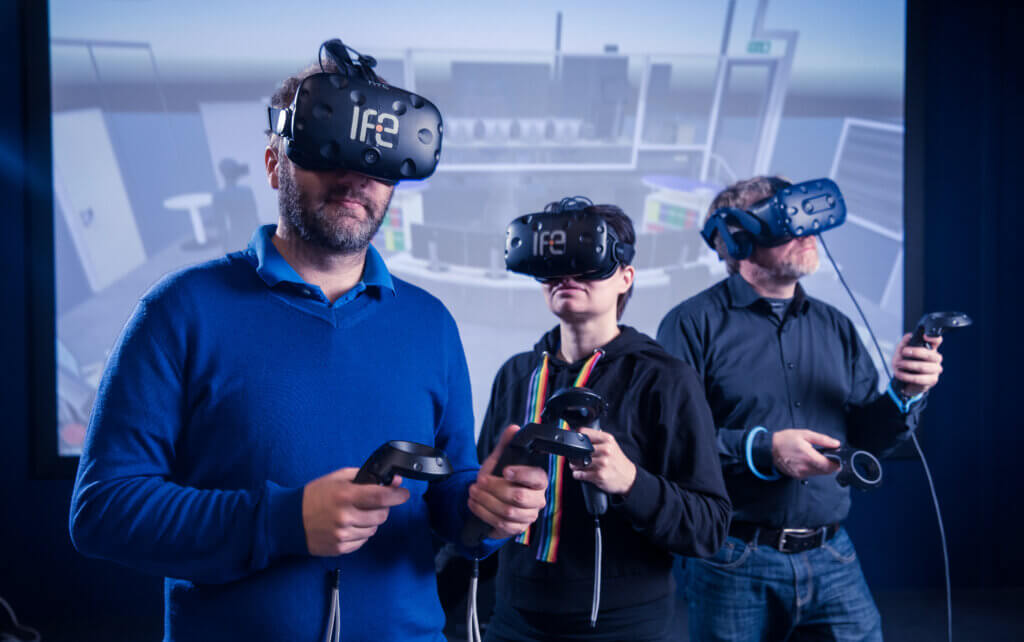 Employees at IFE wearing VR goggles in the VR lab

Spatial computing (SC) is about activities, people, things, and objects that have a position in an environment, where the position of said object is a key component. The thing that separates spatial computing from traditional computing, is that a spatial computing system takes into account the geographical or spatial location that data is associated with.

A good example of how this is used is related to augmented reality (AR). We can use AR to supplement the real world with additional information, which can be of great use in many industries. At IFE Digital Systems, we have used nuclear radiation as a case for AR technology since the early 2000s. Radiation is not visible to the naked eye but can cause serious harm to those who are exposed to high doses of it. Through AR technology and advanced simulation, we can enable workers to see radiation and more easily avoid areas with elevated radiation levels. The information is visualized through mixed reality head-mounted displays or AR-capable tablets and phones, ultimately making the work environment safer.

We have used the same case for simulation in relation to virtual reality (VR) since the 1990s. Whereas AR supplements the real world with digital information, VR present the user with an entirely digital world. This makes it possible for us to create simulation environments for people to train in where the virtual environment represented might be physically inaccessible or dangerous. This also contributes to a safer work environment by giving the workers the opportunity to familiarize themselves with a potentially hazardous environment before they are exposed to it and learn how to behave safely in the environment in various scenarios.

There are many more good cases for using AR and VR. City planners and the construction industry for example are finding this to be a great tool. Instead of looking at sketches and 3D-drawings on a screen, they can see the model in full scale on the site they are planning to build it on. This opens the possibility to more easily see potential errors or challenges that can be fixed before it is built, potentially avoiding large costs to the projects. It also enables the possibility to get local acceptance for projects, and to receive valuable input from local residents. At, IFE, we have used this approach to designing control centres for various safety-critical industries for many years. This is just one area where AR and VR will excel, and the metaverse is adds a whole new dimension to this.

There is only one metaverse

In 2022, the metaverse has become a buzzword with many interpretations offered for what it means. Much of the recent hype will have you believing this is a new concept. It is not. The term itself comes from the sci-fi book Snow Crash by Neal Stephenson, which was published in 1992.  Games and social environments dating back to the 90s and early 2000s, such as Second Life, are examples of early metaverses, and more recent ones like Minecraft, Fortnite, and Roblox can also be cited as examples of metaverses. However, the thing they all have in common is that they are closed and owned privately, whereas the metaverse concept is ultimately a universal and inclusive one. Tony Parisi, co-creater of VRML in the 1990s, an early attempt to integrate virtual worlds into the Internet, has proposed seven rules for the metaverse that we consider helpful.

A huge part of the metaverse and spatial computing in general, is the importance of geographic positions of objects and space, whether real or imaginary. IFE has been a part of the group that has developed Open geospatial consortiums standards for geopositions (“GeoPose”). IFE’s Digital systems division has great deal of knowledge, experience, and environments to carry out research and development using real-life use cases in our laboratories and facilities. We are currently involved in projects related to safety and ethics, decommissioning, control centre design, and smart city AR & VR experiences in the Old town of Fredrikstad.

Who owns data generated in the metaverse?

Relating to smart cities like My Digital City, one of our focus areas has been on the ownership of data and how this is used. This is a key concept for the real-world metaverse of smart cities that the local authorities, businesses, and citizens own the data they generate and create. This ties into our work with Gaia-X, The next generation of data infrastructure. We are working on creating solutions for how different actors can own and access their data. Today, much of their data is collected in silos belonging to the giants in tech, like Meta, Microsoft, Amazon, and so on. This poses a democratic issue and is a hurdle for the open and accessible metaverse. Ethical, safe, and inclusive use of spatial data is also a key focus of the XR4HUMAN project where IFE is a major contributor.

IFE Digital Systems delivers great research on the axis of humans and digital reality. We know the technology and how to use it. We also know why data is the fuel that will run our future societies. Contact us for you needs in the domains of extended reality, augmented reality, virtual reality, metaverse, and how data can help your organisation.